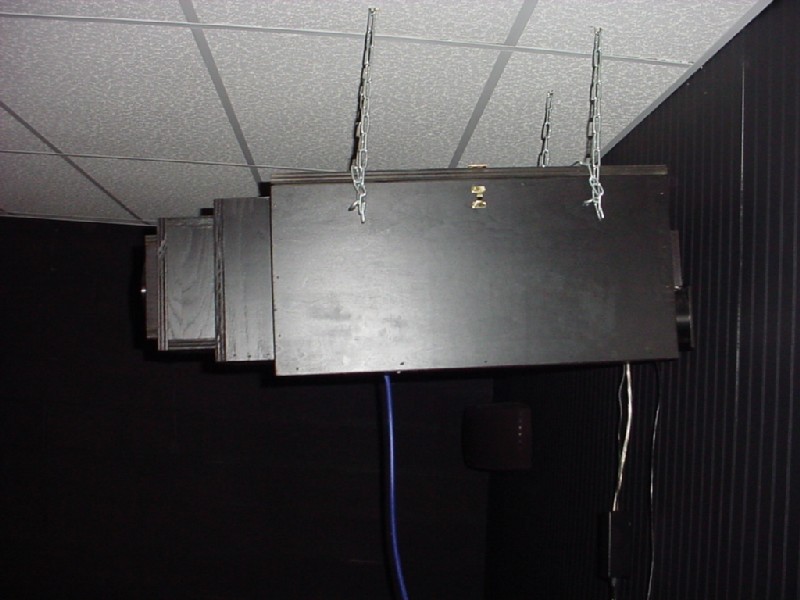 In 2005 I was trying to decide what to do as a hobby next when I came across the website Lumenlabs. It was a site for building your own projector. Now, why would you want to do that? Well other than for the love of building something, at the time projectors were very expensive. And a 1080p projector was anywhere from $6,000-$20,000 . So I decided to give it a try:

This is how it all started, as a basic 15″ Projector.

And here’s the box from slusher357

Here are some pics of the LCD before and after stripping :

Here’s the inside of the box with some assembly done:

And here’s a shot of the back of the box :

And here’s a picture of what this baby can do :

And then it all changed

Well, I was trying to straighten up the LCD and Fresnels and I tightened a screw too far and cracked the LCD..

But that just made it that much easier to buy the Sharp 15.4″ WUXGA Screen and a Controller Kit.

I have the 15.4″ Wuxga installed. I’m just using the standard LL triplet and fresnels until the Pro Lens kit comes in. I’m projecting at 720p from a Samsung Dvd player. The screen is 2 pieces of Parkland Plastic side by side (hence the line down the middle). The size is around 120-130″ diagonal.

I also upgraded to the Ushio PS T15 lamp.

Here are a few of the standard LL pics. These were taken with a Sony Mavica (older one). With the standard Night setting. These haven’t been enhanced or changed other than re-sizing.

Upgraded to the Pro Reflector . I really didn’t notice a huge difference in brightness at first. But then I turned on the lights and WOW. The projector is actually Very watchable with 6- 40 watt flourescent lights on in the room.

Here’s a before and after photo.

Hard to tell with that photo huh. Let me try a Johnny Depp photo.

Here’s a few pics of how I mounted my Pro Reflector.

Upgraded to the Pro Lens and Fresnels.

Here’s a look at how I extended my Slusher box to fit the Pro lens:

And yes those are screws sticking out of the Pro Lens mounting holes. I didn’t have the right size screws and I was tired of going to the store so I figured I’ll replace them tomorrow.

Here’s a few of the inside and outside.

Still have to re-do the wiring a bit.

Finally got a good screen.

It is BEAUTIFUL !!! What a difference it makes. Much brighter and better colors and contrast. White is really white now.

My room is about 17′ by 24′ . With the projector all the way against the back wall it doesn’t quite fill up the whole screen left to right (about 8″ on each side) but it does fill it up top to bottom (8′ 4″ ceiling).

The corners might seem a little darker but it’s REALLY hard to notice. I think with a screen this big the eye and head have to pan from the corner to the middle so our eyes compensate for the brightness difference.

Also, there is no difference in brightness on different parts of the screen. And with the screen being almost as wide as the room there is no “viewing cone” that I can see. No matter where I sit or stand there is the same brightness everywhere. Even when sitting on the floor.

I think with the Pro Lens and the projector at the back of the room it really helps to eliminate “viewing cone” and keystone problems.

I highly recommend this screen to EVERYONE.

Here’s a before and after pic. Movies are totally watchable with 6-40 watt fluorescent lights on.

Some before and after with Lilu :

Well I made a few adjustments.

I moved the fresnels closer to the Lcd but further apart from each other. That helped to even out the light and eliminate some of the dark corners.

Then I cut off some of my focus box. It was 6″ long , now it’s 4″ long. I wanted to make sure it wasn’t blocking any light from the Pro Lens.

So I guess my cooling is sufficient to run this projector without the heat shield.

And it made quite a bit of difference. I would say about 15% better brightness. And the colors seem better also. Don’t know why but they do.

Got the new meter in and did the Lux/Lumen test.

I had it as high as 310 Lumens but it had slightly dim corners. Now the corners are very even and the entire screen is well lit.

And on daytime scenes, it’s a little bright. I need my new Lcd controller in so I can turn down the brightness a little.

Well, my theater room is almost complete so I thought I’d share a pic or two.

I need 2 longer cables to my box and then I can run the cables in the ceiling and hide them. And I have to clean up my “spare parts”.

I put in 18 theater chairs that I got from a flea market for $100. It took me and the family 3 hours to clean them, and then another 3 hours to cut paint and mount the bases for them. And then 1 hour to clean the paint of my boys.

Well here are the pics.

It is HDCP free and upconverts to 1080p through component or HDMI !!!

With a 175″ Diagonal image you tend to notice any lack of sharpness and jaggies on the edge of objects in the movie you are watching, and with my Samsung 850 at 1080i I did notice that. Especially on movies that were recorded in lower resolutions.

There is no blurring or edge jaggies. Everything is amazingly sharp and well-focused. It’s really incredible.

I did not know for sure that the 15.4″ Wuxga panel could do 1080p , but I’m sooooo glad I gave it a shot.
I’m enjoying this projector so much now I’ve almost lost the urge to tinker with it, well almost.

I noticed that I wasn’t capturing the whole lamp arc with the Pro Triplett, and since the 457 is almost an inch wider I decided to try it.

I built a new focus box for it and slid it in and was quite happy with it.

The image before was about 6″ shy of filling my whole 180″ screen. Now it completely fills it edge to edge. Also, the lux increased overall by about 15%. And now my corners aren’t as dim, and I can still get an excellent corner to corner focus.

Here was the description as given to me :

The 457mm triplets come from Opaque Projector. They are 5 inches in diameter and 157mm long.

Pics as compared to the Pro lens :

Then if you want to add more: